First so far as I can tell, small investors trading through commodity index mutual and exchange funds appears to be the minor part of the commodity speculation problem. In trying track down these funds and total their assets, I found less than $40 billion. This leaves $300 billion unaccounted for. How did I arrive at this number?

The commodity indexes most popularly used as benchmarks for commodity investment include in their list a number of British commodity markets. While the US markets, by my estimate quoted in Barron’s, have absorbed $211 billion currently, the total figure including London is $358 billion.

Where is the rest of the money coming from? Institutional investors including pension funds, endowment funds, and even sovereign funds have made significant forays into commodities in recent years as way of boosting and diversifying returns. They have done so up until now in what has to a great extent been a self-fulfilling forecast.

END_OF_DOCUMENT_TOKEN_TO_BE_REPLACED

The CFTC posted this note at their website. Commodity Index Funds have pumped an estimated $70 billion+ into the 12 US commodity markets the CFTC reports in its COT-Supplemental report. They are now the largest long player in these markets, with nearly 40% of the long contracts. If you extrapolate this out for the non-reported markets which are included in popular commodity indexes used as benchmarks, the total “investment” in US commodity markets is upwards of $225 billion. For more background see this post: CFTC Expands Commitments of Traders Reporting.
Release: 5474-08
For Release: March 19, 2008

Washington, DC – Today, the Commodity Futures Trading Commission (CFTC) announced it will convene a public meeting to discuss recent events affecting the agriculture markets – including the lack of convergence between the futures and cash prices, higher margin requirements and the impact on market participants, and the role of speculators and commodity index traders.

“These historic market conditions, particularly in wheat and cotton, require the CFTC to hear firsthand from participants to ensure that the exchanges are functioning properly to discover prices and manage risk,” said CFTC Acting Chairman Walt Lukken.

The forum is scheduled to begin at 9:00 a.m. on April 22, 2008 and will be held in the agency’s Washington, DC headquarters. It will include representatives from the U.S. Department of Agriculture and a broad set of stakeholders in the agricultural markets, such as exchanges, traders, merchandisers and producers. Further details on the forum will be made available in the coming weeks.

Let’s review the long-term performance of the COT Index in the euro. This is the youngest of the currencies we follow, replacing the Deutchemark on the IMM futures board in January 1999. In most ways, the euro has followed the well-established Deutchemark patterns in terms of COT net positions (along with cycles and other technical studies). We could not assume this at the time, however, and it took a couple of years to build enough data history to have confidence in COT signals. Until 2001, we successfully relied on signals in the Swiss franc, which traded pretty much in lockstep with the euro.

same price level as at the prior occurrence (last fall). This hints that fundamentals have quit slip

ping in the franc. Traders should watch for confirmation of a potential major bottom”.

This was published just 6 days following the low of the failure swing bottom that triggered the ongoing 6.5 year bull market. In December 2001 we primed subscribers for what we expected to be a long-term trade:

“In a bull market, the longer you hang on, the higher the profits. We got you in very early in the trend and now encourage you to try to stay aboard for the long term. If you get knocked out by a protective stop, we will be watching for re-entry signals.”(B)

We were fortunate to find optimum rebuying points at key retracement lows in August 2003 (C) and April 2004 (D).

But what about the major buy signal in December 2004 (E)? Commercials were buying on a scale up, not at a corrective low. I dare guess that your casual Commitments analyst did not get this one right. Although the signal was unusual it did indicate a sudden change in large trader sentiment, leading us to expect a trend change. The Dec. 13, 2004 Bullish Review carried this advice:

“CURRENCIES NEW SPECIAL SITUATION: …There are an unprecedented number of December contracts to close out or roll over by the last trading day on Friday Dec. 17. We expect major retracements of the 3.5-year trends will develop off this rollover, and would trade a breakout of last week’s high in the dollar index or low in the euro (or other IMM foreign currency we cover).”

That retracement lasted exactly 12 months during which a single short IMM euro contract gained $25,000 (on a correction!). After an initial bout of selling, commercial buying appeared near the bottom of the correction. On Nov. 25, 2005, we noted trader extremes across the currency spectrum (F):

This was just five days ahead of the resumption of the bull trend that lasted two years and accumulated a $40,000 increase in each long euro contract. The COT Index took on a textbook bull market pattern during this uptrend, with nearly continuous bearish readings reflecting commercial scale up selling. Commercials did buy on corrections, however, providing us exceptionally timely buy signals at October 2006 (G) and August 2007 (H).

The euro appeared to run out of steam in November 2007, consolidating in a 3-month trading range. Was this THE top, or just a resting place in the euro bull market? Commercial buying and a major COT buy signal on February 11 (I) tipped us off to the next bull leg, which has so far accumulated per contract profits totaling $17,000:

“The proximity to the lower trading range boundary makes a low-risk long entry available, in anticipation of an imminent breakout above the upper boundary.” –2/1/2008 Bullish Review

What have we learned from this exercise?

A. COT signals are highly effective in the euro.

B. Play for the big move and try to stay aboard.

E. All of the above. 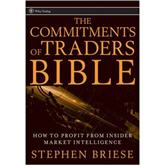 If you are not a subscriber to Steve Briese’s Bullish Review, the weekly market letter devoted solely to the COT report for the last 20 years, you might want to get a year’s subscription at 1/2 price (and some other bonuses) here: http://www.BullishReview.com (This introductory offer is only for new subscribers to Bullish Review.)