Skip to primary content
By Stephen E. Briese
January 20, 2007
Exclusive to: CommitmentsOfTraders.ORG The Commodity Futures Trading Commission began publishing a new COT–Supplemental report last week that, for the first time, details the dealings of commodity index funds in US futures markets. The report will be released each Friday at 3:30 p.m. Eastern as an addition to the existing Commitments reports, which are not affected.
The “COT—Supplemental” introduces a new category of “commodity index traders,” whose numbers were previously commingled with other large trader positions that are reported weekly in the Commitments of Traders In Commodity Futures report. A controversy over the proper classification of these commodity index-related positions led the CFTC, in 2006, to undertake a “Comprehensive Review of the Commitments of Traders Reporting Program.” Commodity index funds typically are static long-only bets on rising commodity prices. At issue, is the amount of capital invested in commodity index vehicles such as mutual funds that finds it way directly, or through swap dealers, into U.S. Commodity futures markets. (An IRS ruling stopped mutual fund dealing directly with swap dealers, adding another middleman, but the bulk of the money is still flowing through swap dealers and into commodity futures and options markets.) Some would call these swap dealers a simple conduit for investor money to reach the futures markets. A better analogy might be a “black hole.”
Traditionally, large traders aggregate positions have been divided into two classifications based on the purpose of their investment. “Commercials” (or the “trade”) had to show that they were using futures for “bona fide hedging” of a cash position in the respective commodity. Anyone else was classified as “non-commercial,” including commodity pools and funds, hedge funds, and their ilk. Since 1936, Congress has limited the size of the latter positions to protect futures markets from excessive speculation that can cause unreasonable or unwarranted price fluctuations and to reduce market manipulation. For instance, an individual speculative investment in the Chicago Board of Trade wheat contract is currently limited to 32.5 million bushels, with a notional value of about $156 million at current prices. This represents about 1.5% of the typical wheat market open interest (analogous to a stock’s market cap).
The COT—Supplemental was the product of the Commission’s “Comprehensive Review,” and addresses complaints both that commingling commodity index funds with traditional commercial hedgers muddied market transparency, and that the popularity of commodity index funds may be responsible for record price levels reached in some commodities like copper and crude oil. If index fund participation has resulted in excess commodity speculation, the CFTC has reason to be defensive. It seems the Commission may be granting speculative trading limit exemptions willy-nilly to swap dealers, euphemistically referring to them as “non-traditional commercials.”
These exemptions are odd in that they grant market access to unregulated intermediaries to an extent that may be denied to the originating investor. A federal court has ruled that swap agreements, in which two parties agree to exchange cash flows from different reference indexes, do not fall under the jurisdiction of the CFTC, SEC, or any federal security regulator. The Commission’s exemption policy can force a regulated pension or mutual fund that runs up against speculative position size limits in commodity futures, to move away from the guaranteed payment of a the regulated exchange to assume counter-party risk in the unregulated netherworld of swap dealers. The swap dealers on the other hand, eat a free lunch: they are granted trading limit exemptions that allow them to deal as a middleman between regulated funds on the one hand, and regulated exchanges on the other, with the associated payment guarantees, while shielding any insight or oversight into their own financial condition or risk profile.
The CFTC has been very defensive about the issue of record commodity prices. As an example, this is what former-acting Chairman Sharon Brown-Hruska told the IMF last June about the complainers: “Engaging in a dime store economic analysis, they see the high prices, particularly in the energy complex, and the increased participation of the swap dealers and funds and they assert that the funds are the probable cause.” The Commission also published a study prepared by its Office of the Chief Economist, that concluded that futures traders were not to blame for record crude oil prices. According to the study, commodity and hedge funds were simply providing liquidity to commercial interests, and no more. Commercials cannot be blamed either. According to the economists, commercials simply adjust their positions in reaction to price changes. The study’s methodology seems quite inventive (which you might expect given the incredible conclusion): “we use highly disaggregated, narrowly defined, position level participant data and for the first known time employ them in a new framework…which, to date, has been surprisingly under utilized in the finance fields” (Haig, Hranaiova, and Overdahl, 2005). Their study cites 40 other works, but fails to address the variation in their findings from those of Garbade and Silber in 1983, that found that in general, futures dominate and lead cash market price changes. This is considered the seminal work in the literature and established the theoretical basis for many later studies. Haig and company certainly should address this discrepancy, especially when their own conclusions appear to be so self-serving.

Reading between the lines, the study supports my contention that at the birth of the first economist it was ordained that no economic hypothesis, no matter how daft, be allowed to stretch reason beyond the ability of an economist find its proof. The NYMEX Crude Oil pit is the largest physical commodity market in the world with total open interest approaching $100 bn, where the largest 538 traders currently control positions averaging $165 mil notional value each, employing 20-1 leverage (or better). It seems implausible to conclude that crude prices are set somewhere else and that NYMEX traders don’t affect the price of oil. My own “dime store” analysis suggests a direct relationship between rising open interest and rising prices in crude oil. During the 1990’s the total open interest (number of contracts open) in NYMEX crude oil futures averaged about 5 days of production (see chart). This figure began climbing in 2002, as commodity index funds became popular, and hit 13 days of production at the oil price peak last summer. The bottom of the chart shows a moving 30-month correlation study. Prior to 2002, correlation readings were zero or less, indicating that open interest and price changes were negatively- or non-correlated. But beginning in 2002, correlation readings moved to near 1 (perfect correlation) and remained there, indicating a high positive correlation between rising open interest (buying demand) and escalating prices. Coincidence or causality?

In a prepared statement, the CFTC Chairman Reuben Jeffery III said “The Commission’s decision to begin publishing this additional COT report illustrates the CFTC’s commitment both to maintain an information system that keeps pace with changes in markets and trading practices and to provide the public with accurate and timely data regarding futures and options markets.” The fact that the new report is being issued under a 2-year pilot program and includes only a dozen agricultural markets, however, leaves it open to continuing criticism. Although these 12 comprise fully half of the markets included in the most widely used benchmark, the Goldman Sachs Commodity Index (GSCI), they represent just 17% of the index weighting, a rather stingy sampling.
The CFTC’s initial release included weekly historical figures for just the past year, limiting (at least initially) the usefulness of the report to market analysts. Each weekly snapshot is mostly useless to traders and analysts without reference to historical ranges—and the longer the better. Despite these shortcomings, the Supplemental does confirm that commodity index funds have impacted futures markets to a substantial degree. The initial report reveals that index traders have taken over as the largest contingent among reported trader groups. As of the Jan. 3, 2007, tabulation, commodity index funds held long contracts valued at $31 billion–in just these 12 markets. This compares to traditional commercial hedgers at $24 billion and the noncommercial category, which includes CTA commodity funds and hedge funds, who were long $18 billion (all notional values). Even more disconcerting is the comparative concentration of traders. The average commodity index trader’s position is 1.8 times the size of the other large traders. This new business has, of course, benefited the exchanges and their memberships enormously, with record volume spawning IPO’s by the 3 largest futures exchanges, including the NYMEX, which topped all other IPO’s in 2006. It has also, I suppose, enlarged the portfolio of the market regulator, always a boon to the prestige, if not the power of a bureaucracy.
But this business has been a bit one-sided, if these 12 markets are any indication. The index traders have added 75% to long open interest, but next to zero on the short side. Futures are zero sum markets, where there has to be a seller for every buyer. The corn pit doesn’t differentiate buying by a manufacturer of cornflakes, from a commodity index investor who doesn’t even eat cornflakes; all it sees is demand for corn. The current report shows that demand for actual agricultural products (whether from China or India or whoever gets blamed) is overshadowed by investment demand. This unbalanced buying demand is unique to these commodity index traders and unprecedented in commodity markets. A micro economist might find a disconnect between classic supply-demand curve theory and the CFTC economists’ contention that futures investors are not behind record oil prices (or by implication, sky-high prices in gasoline, heating oil, gold, silver, copper, platinum, cattle, hogs, corn, wheat, orange juice, or sugar). 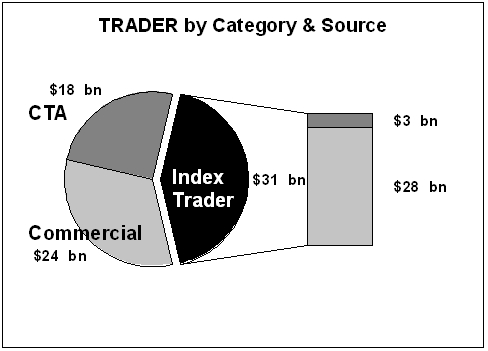 The COT-Supplemental report also confirms the beliefs of many critics who thought these index-related positions were probably being (mis)categorized as commercial traders, a practice that has made it impossible to judge how much buying represented real raw material demand as opposed to speculative or investment demand. The new index trader total includes $28 billion removed from the “commercial” category, while just $3 billion came from the speculative fund total. In other words, in these 12 agricultural markets—Chicago wheat, Kansas City wheat, corn, soybeans, soybean oil, cotton, hogs, feeder and live cattle, cocoa, international sugar, and coffee—55% of recent buying demand thought to be commercial trade related was in reality investment demand.

This site uses Akismet to reduce spam. Learn how your comment data is processed.